The 'Obamification' of Pope Francis

The 'Obamification' of Pope Francis

Pope Francis is visiting Cuba until Tuesday when he heads to the United States. CNN will have full coverage online and on CNN TV.

(CNN)Some pontiffs have been beatified or canonized, but Pope Francis is receiving a far more dubious honor.

The charismatic Pope, who arrives in the United States on September 22, has gained fans in and out of the Catholic Church for denouncing unfettered capitalism, warning about climate change and urging mercy toward divorced couples and women who have had abortions.

He's also sparked a strange trend. The same political slurs and conspiracy theories that critics have used against President Barack Obama are now being deployed against Pope Francis. One critic even says the two leaders have morphed into one sinister figure he calls "Popama."

The Obamification of Pope Francis includes charges from conservative critics that he's either a socialist, the Antichrist, an illegitimately elected leader who wants to create a "New World Order" -- or all of the above. Their anxiety was captured by the headline of one online column: "Pope Francis is the Catholic Church's Obama -- God help us." 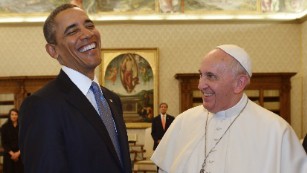 Critics of Pope Francis have borrowed from the playbook of President Obama's critics.

Such apocalyptic warnings about Francis reflect normal anxiety over a new leader, says Greg Erlandson, publisher of Our Sunday Visitor, a Catholic organization that distributes church textbooks and religious materials.

"There's been some crazy stuff going around," Erlandson says. "You're always going to get a fringe element, on both the left and right. There's some guy in Canada claiming to be the Pope."

Yet conservative concerns over Pope Francis appear to be growing. A Gallup poll this summer showed that Pope Francis' support among American conservatives fell from 72% last year to 45% in July.

"There is a sense that he is or could be introducing significant changes in the church," Erlandson said, "and people find that very threatening."

Some of that anxiety goes beyond traditional debate over church doctrine. Here are three ways the Pope is being Obamified:

No. 1: He's a stealth socialist

Religion and money -- it's hard to find a more combustible combination. Pope Francis' comments on faith and finance have ignited a theological firestorm.

He said the poor have "sacred rights" of labor, lodging and land. He called the "unfettered pursuit of money" the "dung of the devil" and accused world leaders of "cowardice" for refusing to defend the Earth from exploitation.

During a speech to grassroots organizers in Bolivia in July, he called on the poor to rise up against "new colonialism," including corporations, loan agencies, free trade treaties and austerity measures.

The Pope's critique of capitalism has caused some -- including conservative radio talk host Rush Limbaugh -- to suggest Francis is a Marxist, a label he denied in a 2013 interview with an Italian newspaper. "The Marxist ideology is wrong," Francis said. "But I have met many Marxists in my life who are good people, so I don't feel offended."

Yet some conservative critics don't believe the Pope. Like Obama, they accuse him of being a secret socialist.

Conservative radio show host Michael Savage said the Pope is a "stealth Marxist in religious garb." Fox News business show host Stuart Varney warned in June that the Pope may align with Obama to gang up on the rich.

"Will Francis and Barack reshape the world by taxing the rich, taxing fossil fuels and redistributing the wealth?" Varney asked. "That's exactly what they are trying to do." 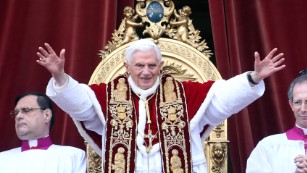 Pope Francis' economic message is no different than his predecessor, Pope Benedict XVI, above, Catholic commentators say, but some critics call Francis a Marxist.

Denise C. McAllister, a senior contributor to the Federalist, a conservative online magazine that covers politics, religion and culture, said the Pope's "social justice schemes" are immoral and similar to Obama's "socialist ideology."

McAllister wrote that Catholics have a moral responsibility to care for the poor, "but the greatest vehicle for alleviating poverty and deprivation is the very institution of free market capitalism that [the Pope] now denounces."

Yet Patrick J. Deneen, a Notre Dame professor, says Francis' statements on capitalism are no different from those of his predecessors. The Catholic Church has long been critical of unfettered capitalism. He says Pope Benedict XVI once wrote about the importance of "distributive justice and social justice for the market economy."

"Even though the church's teachings have not changed one jot under Francis, he has placed more emphasis on economic matters," says Deneen.

No 2: He's the Antichrist

In July, Jennifer LeClaire asked readers of Charisma magazine to Google the phrase "Is Pope Francis Antichrist." The query produced 425,000 hits, she noted. (That number is now 440,000.)

Pope Francis hasn't yet caught up with Obama in the Antichrist category. A Google search for "Is Obama the Antichrist" yields more than 800,000 results. But LeClaire's column reported on a growing belief among some Catholics that the Pope is a diabolical figure in papal clothing.

"Could Francis be the final Pope before Christ's return?" LeClaire asked. "Could he be the Antichrist? Is he the False Prophet? The chatter continues. ... "

Pope Francis is not a legitimately elected holy vicar of Jesus Christ as many believe, but he is the very igniter of a new world.

A recent Washington Post article noted there has "sprung up a cottage industry of books, DVDs and websites promoting Francis' dissenters."

Some of the dissent leads to conspiracy theories that would be familiar to anyone who has followed conservative reaction to Obama's presidency.

After his election in 2008, rumors circulated that Obama's victory was not legitimate because he was not actually born in the United States and there was massive voter fraud.

Similar conspiracy theories about Pope Francis' election "won't die," according to David Gibson, a reporter for the Religion News Service. The theories revolve around the belief that Francis doesn't have a legitimate claim to the papacy.

"Among them," Gibson wrote, "Benedict used incorrect Latin in his formal resignation letter, so it is invalid; alternately, they say, the cardinals in the March 2013 conclave that elected Francis violated certain procedures, so his election is null and void."

One critic who goes by the name Paul Joseph C. edits The Wild Voice, a website devoted to Catholic current events and subjects such as "the mark of the beast" and the "Illuminati." He says Obama and Francis are both cunning figures -- but that the Pope is even more dangerous.

"We are in the presence of a very powerful political figure, the likes of which we have never witnessed before," he says. "Pope Francis is not a legitimately elected holy vicar of Jesus Christ as many believe, but he is the very igniter of a new world." 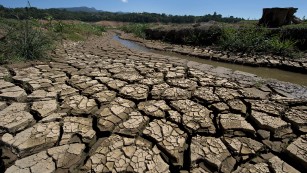 He writes that Francis and Obama are "perfect dictators" who are using their anti-Christian agenda to ruin America and the church. He sees such disturbing similarities between the Pope and the President that he calls Francis "Popama."

The conspiracy theories have strayed into the mainstream media. After the Pope recently spoke about the dangers of climate change, Fox News commentator Lou Dobbs warned that Francis was describing "a new world order" and "a new global organization."

Where does this talk come from?

Elizabeth Stoker Bruenig, a religious commentator who has written about Pope Francis for the New Republic, says critics use such language because the Pope and Obama have in one way uttered blasphemy -- they question the sanctity and the "moral neutrality of markets."

"What all these things have in common is that they're essentially the worst possible thing the right-wing Id can come up with," she says. "You don't have to actually do anything indicative of being a socialist, communist or the Antichrist to earn these titles."

After Obama was elected, critics said he apologized too much for the sins of America's past. Conservatives labeled one of the President's earliest international travel stints as "Barack Obama's Apology Tour."

Some are now making the same accusation against Pope Francis.

During his speech in Bolivia, Francis apologized for the Catholic Church's treatment of Native Americans.

"I humbly ask forgiveness, not only for the offense of the church herself," Francis said, "but also for crimes committed against the native peoples during the so-called conquest of America."

And during a visit to an Italian church last month, the Pope apologized for past persecution of Pentecostals under Italy's early 20th century fascist government. 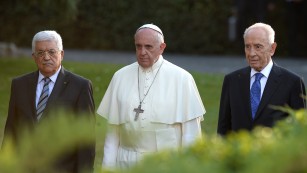 Meetings at the Vatican between the Pope and Israeli and Palestinian leaders have led some critics to accuse Francis of having an Islamic agenda.

The apologies irritated one critic so much that Adam Shaw, an editor for FoxNews.com, wrote the opinion piece entitled, "Pope Francis is the Catholic Church's Obama -- God Help Us."

"Just like President Obama loved apologizing for America, Pope Francis likes to apologize for the Catholic Church, thinking that the church is at its best when it is passive and not offending anyone's sensibilities," Shaw wrote.

Carl Olson, editor of Catholic World Report, said he and other Catholics think Pope Francis expends too much energy apologizing for and chiding the faithful.

In a column last month entitled, "The hyperbolic and exhausting papacy of Francis," Olson wrote that the Pope obsesses over certain points such as the sin of gossip to a degree "that is frankly grating."

Olson, who describes himself as an orthodox Catholic, says the Pope seems to ignore the struggles of ordinary middle class people who work, raise families, pay the taxes and "keep society afloat while chaos and madness swirls around."

"At times it appears that the Pope will praise non-Catholics, including atheists, but then ignore how hard ordinary Catholics are striving to live the faith," Olson says.

Some have even suggested that Pope Francis' allegiance to the Catholic Church is so shaky that he has an Islamic agenda -- an accusation similar to one directed at Obama.

Could Francis be the final Pope before Christ's return? Could he be the Antichrist? Is he the False Prophet?

In her Charisma article about the Pope, LeClaire dismissed rumors that Francis said the Bible and the Quran are the same.

"Meanwhile, Francis has warmed up to Islam like no other Pope before him. In a historic first, Francis opened the door to Muslim prayers and Quran readings at the Vatican last year. Palestinian President Mahmoud Abbas and Israeli President Shimon Peres joined the pontiff in the Vatican gardens for a prayer meeting."

Still, the Pope and the President are different in at least one crucial way, says Earle Scarlett, a retired U.S. diplomat who writes about religion.

While arguing that Obama and Francis share a yearning for economic justice, Scarlett says Francis is freer than Obama to pursue his vision because the same checks and balances that stymie the power of the presidency don't exist in the Vatican.

"In the American government, a guy can get up and say you're a liar to the president," Scarlett says. "Can you imagine a bishop or cardinal saying that to the Pope in a meeting? I never heard of a Pope being dethroned. But I've heard of presidents being impeached."

As the Pope visits the United States, it's doubtful anyone will stand up and call him a socialist or the Antichrist.

But among Pope dissenters, the chatter will continue.